My original motivation for watching Emily in Paris was the latter, - because I already visited this majestic city once before. After visiting France a few years ago, I fell head over heels in love like so many others have with this beautiful yet mysterious place that somehow felt just as much mine as it did theirs. Emily in Paris would let me reminisce about the scenery, cafes and overall feeling of wandering around carefree...But what really got me hooked on this show was the fashion styling, even after its clichéd love story and unrealistic dialogue.

But then came Season 3... And I couldn't resist getting drawn into every single episode! It might not seem realistic or even logical at times but no matter how cheesy it gets or simple the storylines may be; it's the unpredictable fashion that gets me everytime.

Fashion critics quickly pounced onto this new show and attacked Emily for her bad sense of style, accusing her of perpetuating the image of an ignorant american who didn't know how to dress properly. All the major fashion houses tore apart every single outfit the producers put on her. Yet, that is exactly why the show grew popular - people enjoyed seeing someone who could match all these hideous outfits together without making any fashion sense. As the seasons went by, every character on the show started dressing badly--that is until Season 3 where everyone really went downhill. Yet, even though we all want to see what other crazy things these characters come up with - that's precisely why we watch!

Amidst all the outlandish outfits and mismatched accessories, there are trends we should be taking note of. Season 3 for instance—I've chosen three trends that are highly visible on both runway shows at major fashion houses and as street style: feathers or feather-like pieces, platform shoes (especially Mary Janes), and sequins.

The first two were always in my radar but I was surprised by the third trend when it came out of left field; obviously this is because it comes from a TV show airing during Christmastime. But if you look carefully enough at Mindy's performance costumes, you can see just how intricately detailed these pieces really are - something worth emulating for sure! 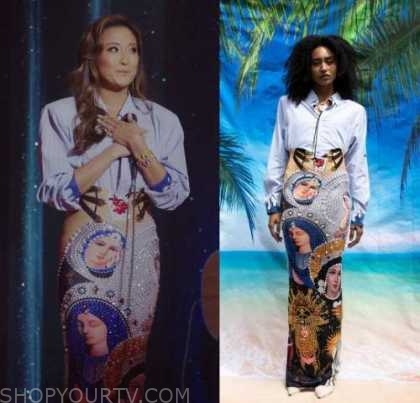 The clothing worn by Mindy and Sylvie on Season 3 of the show is much more revealing than previous seasons. Some of it was completely inappropriate given the situation, but it actually makes sense considering their personalities and current relationship status. It also stands out compared to Camille's outfits which are still pretty conservative, even though she has her own secrets.

It turns out the show designer, Fitoussi was heavily influenced and coach by Patricia Field—just think about how fabulous those SATC girls always looked! Fitoussi believes in looking outrageous - clothes that provoke people and make them fall in love with fashion over everything else. She takes pride in the controversy and loves that people hate to love the extra-ordinary.

Season 3 had the most clothing changes out of all previous seasons which come from just one character: Emily who wore 43 different outfits in just 10 episodes alone! Here are some of my favorite inspired looks and how I would make them more accessible for everyday wear.

We would like to take this look into a more parisien iconic piece. Like our Noole Coco Tweed Jacket. One of the most outrageous outfits was the Butterfly Wings Jacket with Zebra Print. Paired with some short shorts. 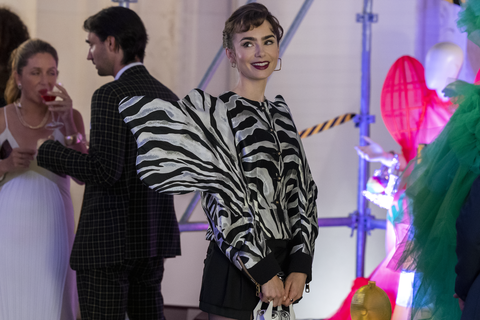 This Dolce & Gabbana top is more of an avant garde runway look and it is not available online. BUT. We have a version of those wings in a bit more tame silhouette. Our Noone Structure Petal Jacket is a piece than can emulate. As part of our own AVNT Garde Collection, Noones come in Lavender and Navy Sky. Paco Rabanne silver-and-violet high-neck sequin gown. This masterpiece is vintage and it makes me go into our Archives and look for something as fabolous that could emulate this piece. Stay tune.

PD. If you want to browse more looks from Season 3, please ready the Elle article on the outfits and more insights about the show designer herself.